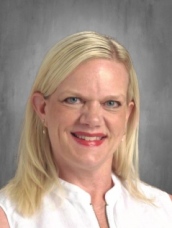 Classroom Information
About Me

I teach all levels of French at North Star, and am an "Original Gator." I was honored to be hired as Department Chair of World Languages when the school opened in 2003. Previously, I taught English at Lincoln East High School and Lincoln Southwest High School, and French at Omaha Central High School. I was a graduate teaching assistant in French at the University of Nebraska-Lincoln for three years while I pursued a Masters Degree in French Literature.

I also taught English just outside of Paris for one year at a French Middle School called Collège Roger Martin Du Gard. While there, I gained two "familles françaises" who showed me the "real France." I was able to travel all over France and Spain and also get be the first to discover French Macarons, which I now see all over the place. (I highly recommend the ones at Le Quartier bakery.)

Before realizing my true calling of being a teacher, I worked for several years in a marketing company called BI Performance Services in Minneapolis, Minnesota. I am originally from Minnesota but have called Lincoln home since 1997.

Outside of school, I teach BodyFlow, BodyCombat and BodyStep at the Genesis Racquet Club and enjoy spending time with my husband and our three children. I collect pottery, vintage jewelry and linens, and love to read, travel and bake. We have one Jack Russell Terrier named Rooster Cogburn.

I cannot wait to meet my students each year and instill a love for all things French in them -- as well as a love for learning about new cultures and different perspectives. I hope my students will participate in the many outside activities North Star offers for French language opportunities.

2009 Nebraska French Teacher of the Year